“The first time I used a pipette was in my high school biotechnology class; I have been hooked on science ever since!”

“The most useful trait I’ve acquired during my time at the University of Arizona has been confidence. Confidence in public speaking, confidence in asking questions and confidence in talking about my research” said Amanda Warner, UA double major (MCB and CBC), Class of 2020, and latest winner of the Danny Brower Memorial Scholarship. Amanda told me she developed much more confidence while working in science research labs, something she has done since she was a sophomore in high school. 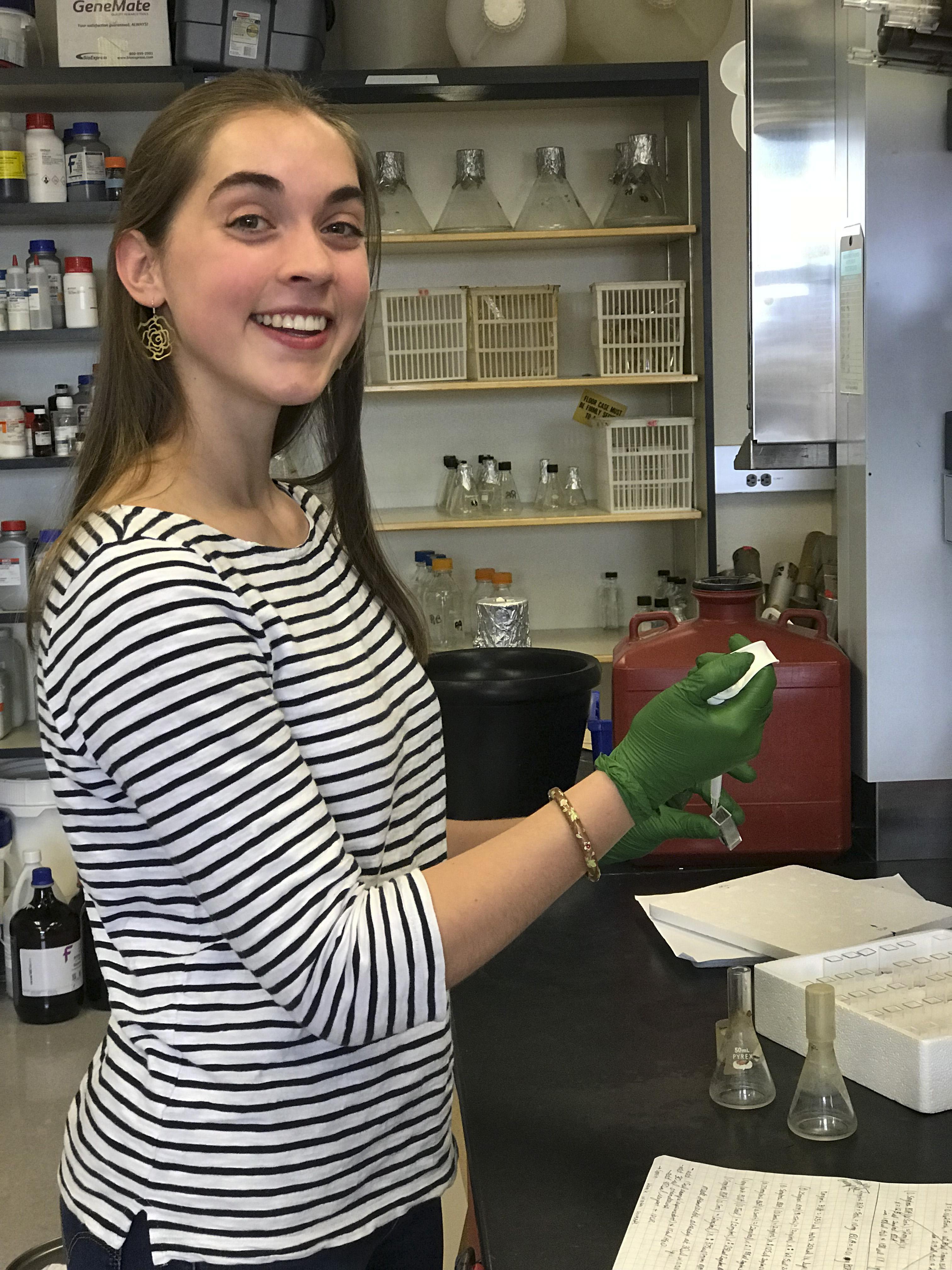 Warner was introduced to research when she worked at the USDA for three summers in high school, her last two summers with Dr. Joe Hull, where she studied the circadian rhythms of Lygus hesperus bugs. They were researching ways to reduce the harm these bugs do to crops without using pesticides. “Being able to do experiments in Dr. Hull’s lab was really cool and I knew that I wanted to continue working in a lab when I attended college.”

The decision to come to UA was influenced by her internships at the USDA and her involvement in the Biotech program in high school. “I had an awesome high school biotech teacher. She was really excited about sharing science and let us know about opportunities where we could get involved in research” enthused Warner. High school Bioteh programs work closely with MCB's education outreach program, The Biotech Project, which provides technical support to Arizona middle school and high school teachers to conduct molecular genetics experiments (DNA science) with their students. “We learned about cancer and the mechanisms of disease which is what drew me to MCB.”

Warner jumped right in to research when she arrived at the UA, working in Dr. Nikolich-Žugich’s lab as a freshman and sophomore. There she learned about the immune system’s role, specifically T-cells, during aging.  Warner worked with mice and helped collect tissue samples such as the spleen and lymph nodes in order to perform immunohistochemistry to identify the T-cells within the tissue. “Working in Dr. Nikolich-Zugich's lab was a great experience and it sparked my interest in studying the role of the immune system in cancer in graduate school.”

Warner was then accepted into the prestigious Beckman Scholars Program and the UBRP Program when she was a sophomore. It was through these two programs that Warner began working in Dr. Ross Buchan’s lab the summer before her junior year.

Since joining the Buchan Lab, Warner has started a project to determine how the huntingtin protein, which is mutated in Huntington’s disease (HD), is disposed of in the cell.  HD is a devastating neurodegenerative disease that causes brain cell death and leads to symptoms of lack of muscle control and dementia. ”Normally our cells have mechanisms that act as trash cans as they dispose of unwanted or altered proteins. Our lab believes that some of these mechanisms may be non-functional in Huntington’s disease” Amanda explains. Her project involves studying the disposal mechanisms of the huntingtin protein which could provide insight into the regulation of Huntington’s disease. Buchan was impressed by Warner as soon as he met her and recognizes the contributions Warner makes to his lab. “She is not afraid to tackle methods in the lab that no-one else have prior experience of. She shows remarkable intellectual ownership of her project and has on more than one occasion made good suggestions about new experimental goals to tackle that we have ultimately decided to pursue.” 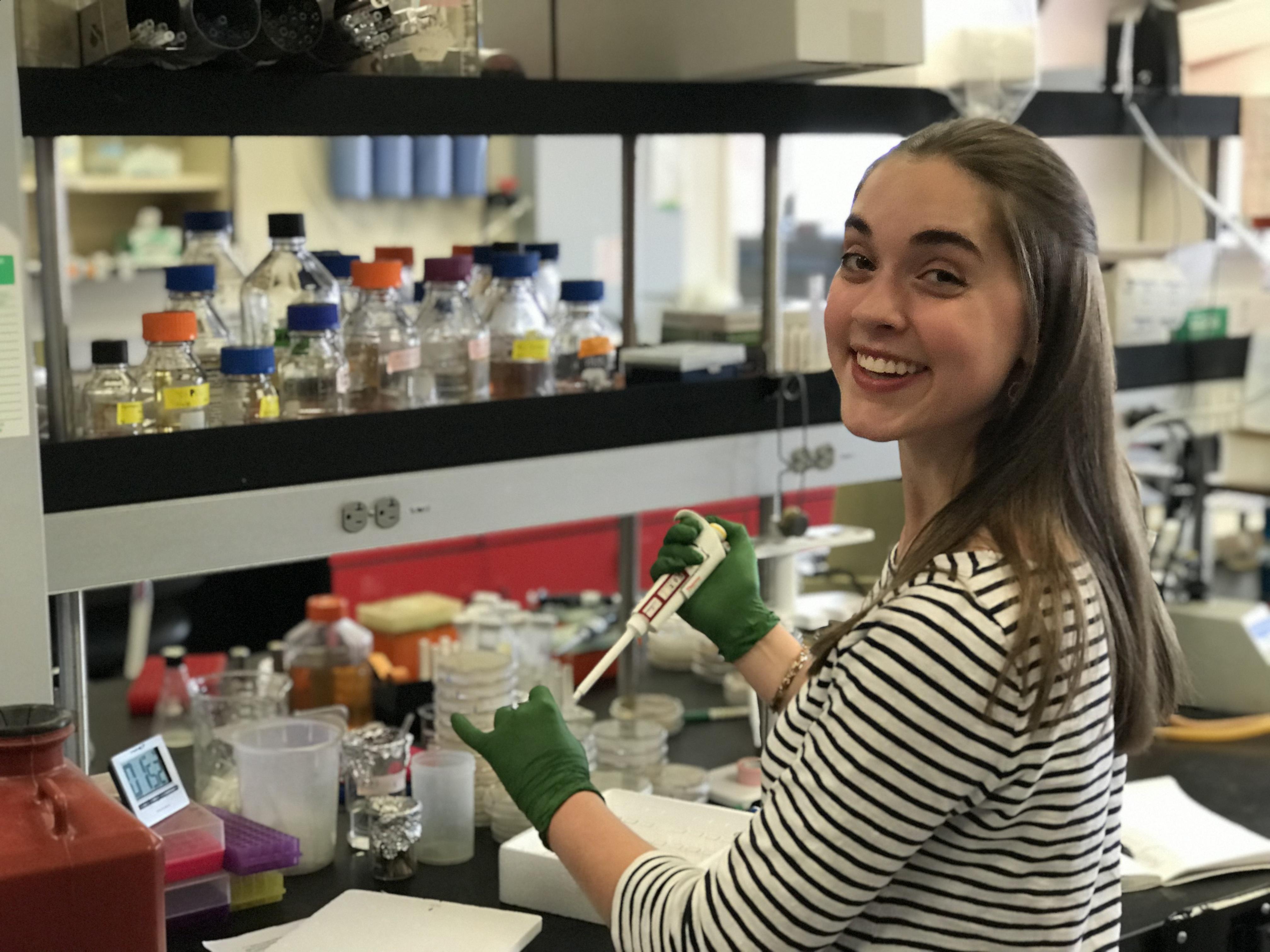 Given Warner’s experience in labs doing research and her passion for research, it’s no surprise that she was selected as the Spring 2019 Danny Brower Scholarship winner. This scholarship is awarded each year to an undergraduate student involved in research. The scholarship was established by the department of Molecular and Cellular Biology to honor the professional accomplishments of Dr. Danny Brower, Professor and scientist for over 25 years at the University of Arizona. In the Fall of 2007, Danny passed away unexpectedly. He was an inspiration to many, and though Warner did not have the opportunity to meet Danny, she was inspired by what she’s read and heard about Danny. “I really like how Danny Brower was involved in giving back to the community and encouraging the next generation of scientists. This scholarship also resonated with me as Dr. Brower was interested in both the basic and translational aspects of science similar to my interests and research goals.” Warner credits her work in the lab for giving her the confidence to apply for the scholarship.

The Danny Brower scholarship isn’t the only one Warner received this semester; she also won the Excellence in Biological Sciences Award, The Michael A. Wells Memorial Scholarship, and the Dr. Thomas M. and Candace C. Grogan Scholarship all from the UA College of Science Chemistry and Biochemistry department.

We are pleased to have been a part of Warner’s college and research experience and look forward to following her as she launches in to the next phase of her life! Congratulations Amanda; we know Dr. Brower would be pleased to have had an impact in your life!