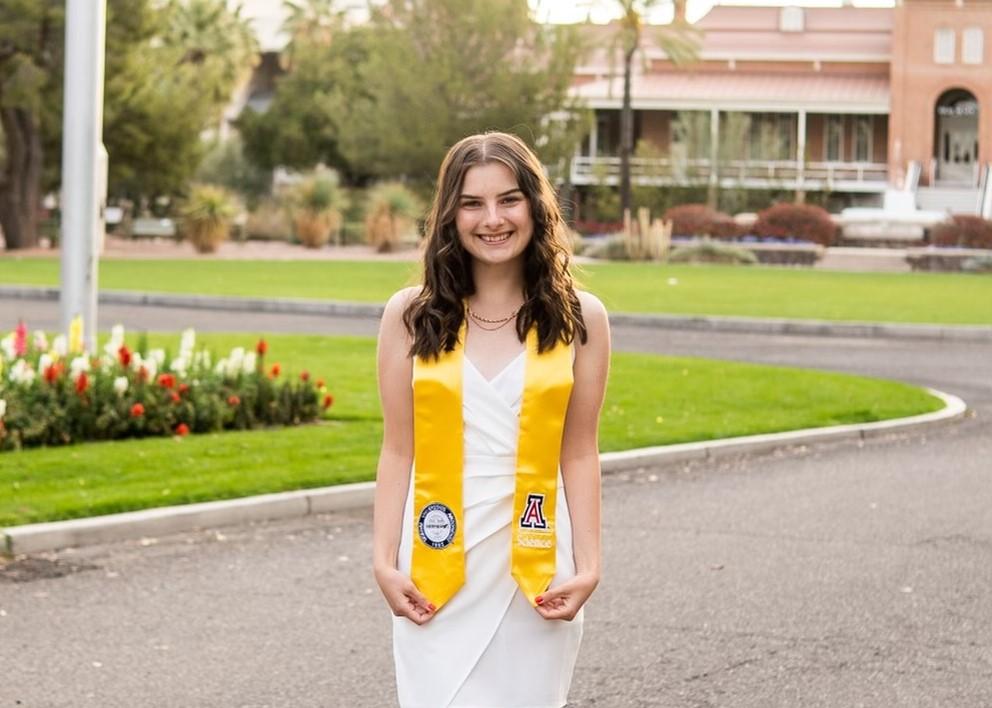 Congratulations to Hannah Quick, who has won the May 2022 Excellence in Undergraduate Research Award for the department of Molecular and Cellular Biology (MCB). “I feel really honored. I think being able to represent the research interests of the department is a wonderful honor, and it's really gratifying to know that my work has been recognized,” Hannah says about winning the award.

Hannah started at UArizona as an EEB major (Ecology and Evolutionary Biology) because of her interest in animal behavior, but she switched to MCB when she discovered that she really liked molecular biology. “When I took Ornithology, my favorite unit was not actually the behavior unit. It was the unit on genetics and biochemical pathways of different processes in birds. That really piqued my interest.”

After she switched majors, Hannah said that she really loved it. “I think MCB is the perfect place for me. I think I’ve really found my calling in molecular biology, and so I feel at home here in this major.”

Hannah’s interest in science started at a very young age. “I feel like I was just born loving science. When I was a little kid, I would go to observatories and planetariums, and I would walk around telling everyone, ‘Did you know that it takes 8 minutes for light to reach earth.’” She liked all aspects of science from meteorology to geology and found her calling for biology in high school. 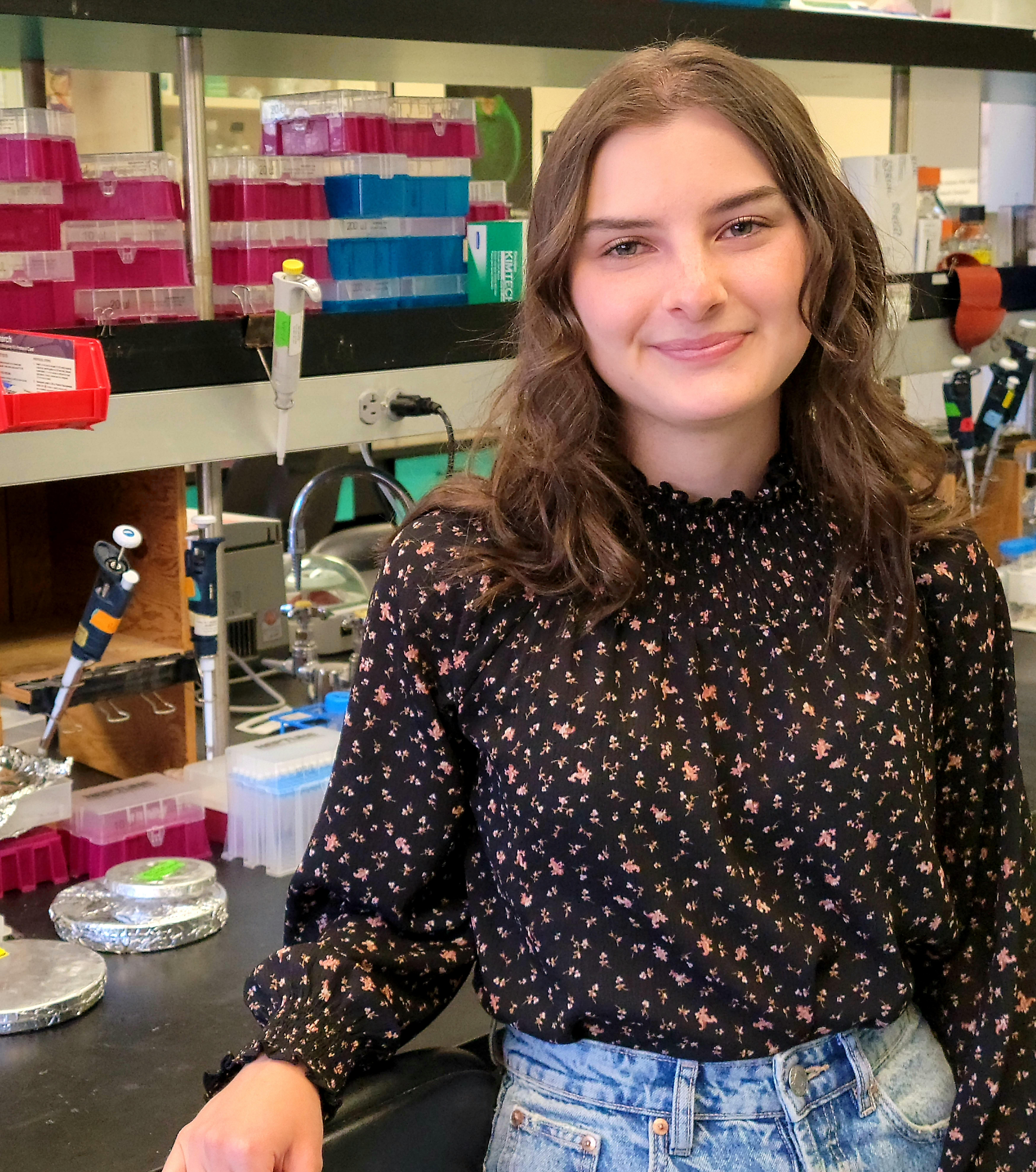 At UArizona, she joined Dr. Lisa Nagy’s Lab in MCB. The Nagy Lab studies the genetic basis of morphological diversity. One aspect of the research is looking at the regulation of genes that play a role in insect segmentation. Segments appear during early embryonic development while the insect is still inside the egg. Hannah’s research project studies the enhancers of the segmentation gene even-skipped (eve). Enhancers are stretches of DNA around a gene where proteins bind to turn the gene “on” or “off,” and alterations in these regions can lead to morphological change.

Hannah is researching the function of the enhancer that is upstream of eve. To do this, she collects eggs from transgenic flies that express a fluorescent protein when the enhancer expresses eve and mounts embryos of various ages on a slide. Then, she can use live imaging under the microscope to identify when the enhancer is expressed during specific stages of development.

“I’m glad that this was the lab I joined because I’ve really fallen in love with the work. I think it's really interesting,” Hannah said. 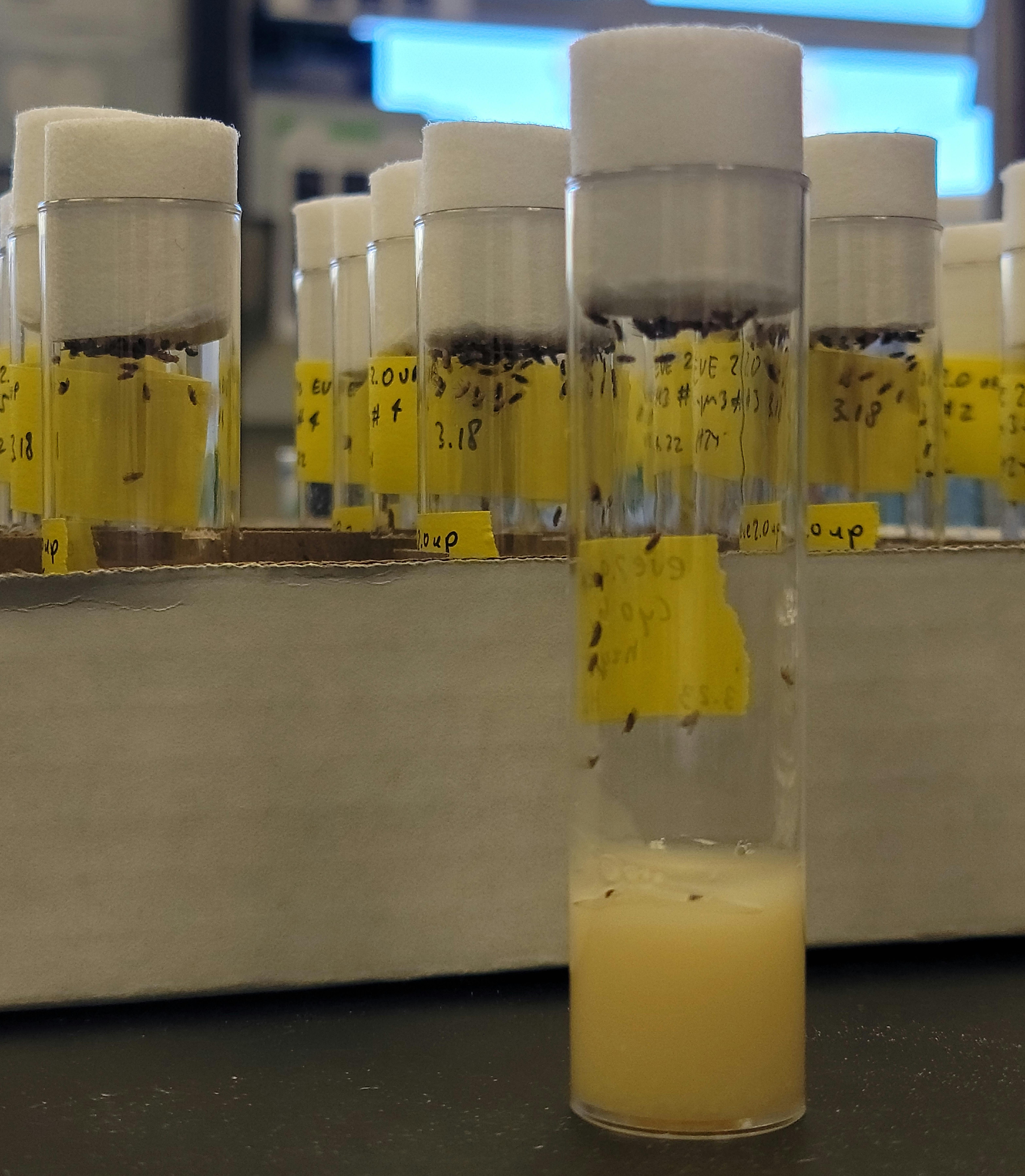 Apart from research, Hannah has enjoyed her classes too. “I always tell people I never took an MCB class that I didn't like. I took MCB 325, The Biology of Cancer, with Dr. Lisa Rezende. I was kind of afraid of it going in because I’m not a clinically or medically oriented person, but I loved it. We learned a ton of different pathways and their role in disease, and I think that it was so gratifying. Plus, Dr. Rezende is really wonderful professor.”

Outside of research and classes, Hannah said that her best experience at UArizona has been the people. “I think that the MCB major is a special place. Interacting with everyone from professors to fellow students has been an enriching experience and something that's definitely one of my favorite parts of being here.”

After graduating from UArizona, Hannah will be going to Princeton University for her PhD as part of their molecular biology program. She will be taking the skills that she learned in MCB with her. “All of the techniques that I have learned at the lab bench have been really valuable. Being a part of a lab and doing applied work has made all of my coursework click, and it has accelerated my learning.”

Outside of the lab, Hannah says that she is a huge bird watcher. “I have always loved birds, and Tucson is incredibly rich in biodiversity. There's just so much life in the desert you wouldn't think.” She is also an artist enjoying visual and performance art. “I love the theater and enjoy participating in or just watching live theater performances on campus.”

Congratulations, Hannah, on winning the May 2022 Excellence in Undergraduate Research Award for the department of Molecular and Cellular Biology (MCB)!