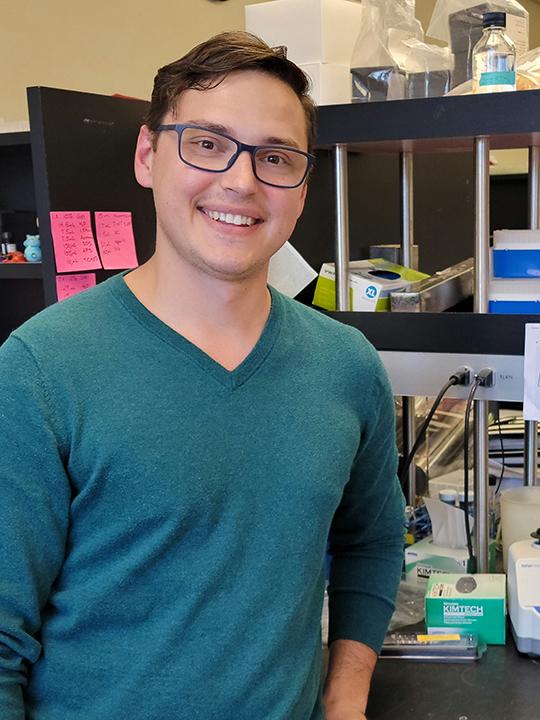 Congratulations to Ben Atwell who has won the 2022 Molecular and Cellular Biology Outstanding Graduate Student Award in Scholarship. Ben is in the last stage of earning his PhD. “Receiving this award is a nice way to finish. It is exciting to be near the end, and it is super cool to be honored in this way,” said Ben.

Ben studies the epidermal growth factor receptor (EGFR) protein and what it does in triple-negative breast cancer. “It does some pretty weird stuff in breast cancer that it doesn’t do in other cells. In normal cells, EGFR is activated, signals, and then it is degraded. In breast cancer, it does something totally new. It gets internalized and goes to the nucleus. In the nucleus, it does things that are very oncogenic.” 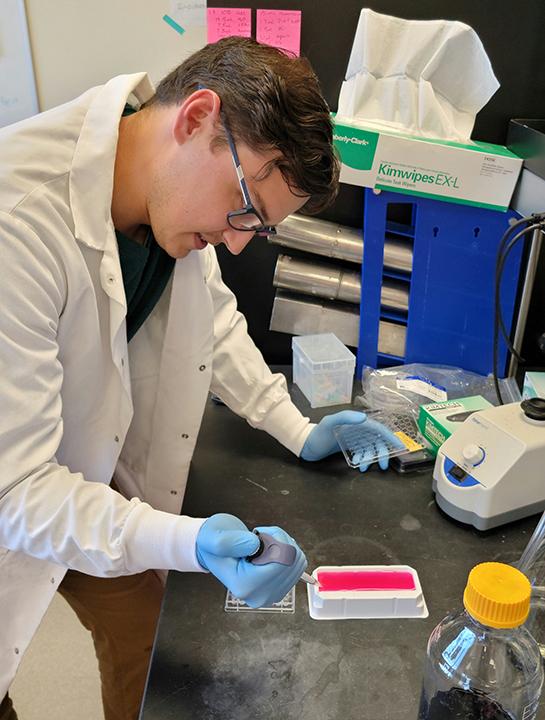 In normal cells, EGFR is involved in growth and development. It drives cell proliferation and cell movement. For example, if you got a cut on your skin, EGFR would be one of the proteins that signals to help heal that wound. “It does similar things, but that plays on cancer as a story. A lot of what cancer does is takes things that are normally happening in cells and over activates them or does something that makes them more potent for cell growth.”

Ben’s project is to design a peptide-based therapeutic with the goal of blocking the nuclear localization of EGFR as a way to shut off the oncogenic signaling events.

Ben has tested this new therapeutic in cell lines and some mouse models as well. “In the cell line tests, we get really good targeting of the cancer cells, whether that is a reduction in proliferation or migration. We can also look at the actual location of EGFR, and we see a total block in nuclear EGFR with the drug treatment after only two hours. It is getting in there and working quickly to block that nuclear localization and all of those oncogenic phenotypes. The normal cells are not affected, but the cancer cells get hit pretty hard.” 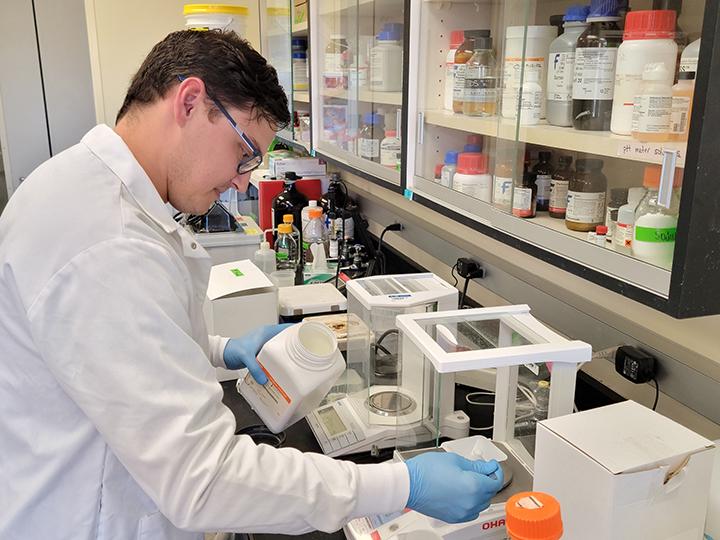 Ben saw a really great response in mouse models as well. “Looking at the drug treated population, we saw a reduction in tumor growth in a majority of them. What we were really excited about was three mice that totally regressed down to nothing. They entered the study with a tumor, and after a few weeks, the tumor shrunk until we couldn’t feel anything at all. After the study, we did a necropsy to look, and there was no tumor there!”

That was only their first animal model, and more studies are needed. After these amazing results, the lab has been able to get a patent on the drug which is a huge step in continuing the research. 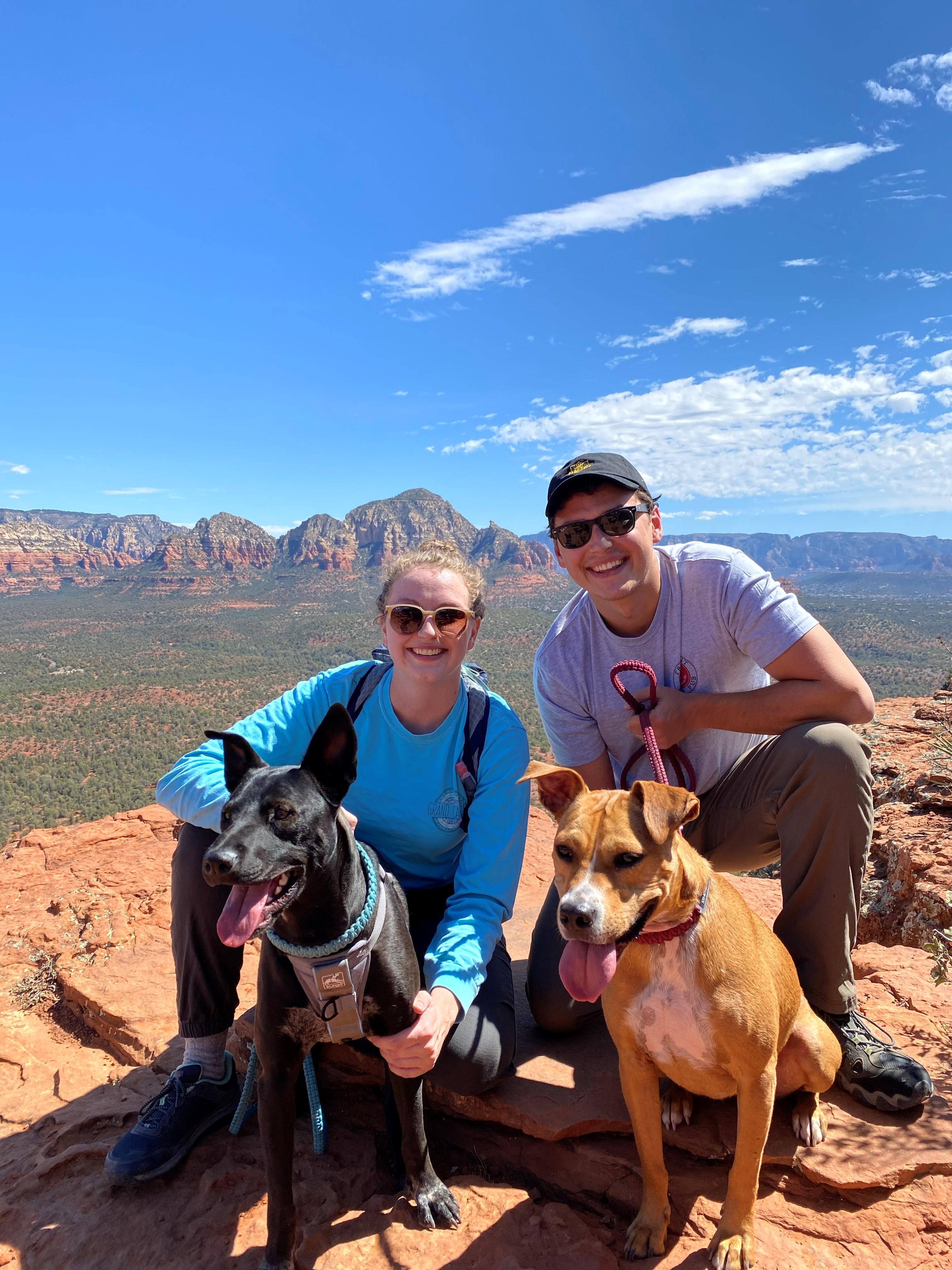 After graduation, Ben is continuing in the Schroeder Lab as a postdoc where he will continue to work on his project. “We have a paper that has been submitted, but we are waiting for the reviews to come back. Continuing with the lab will allow me to follow up with comments and do the additional work that is needed. It is great to have the opportunity to continue working on this project.”

Plus, Ben has really been enjoying his time with MCB. “I was part of MCB since I was an undergraduate. From the science perspective, I love cells, proteins, and how they interact with each other. From the culture side, MCB is just the coolest department. The faculty are supportive of students and provide them with good opportunities to learn. They care about the classes and create classes that are really interesting and important.”

Outside of school, Ben enjoys hiking and mountain biking. The Schroeder Lab has gone on group hikes together and even hiked rim-to-rim across the Grand Canyon!