What can you do with an MCB Degree? One MCB alumnus is working as a Crime Scene Specialist 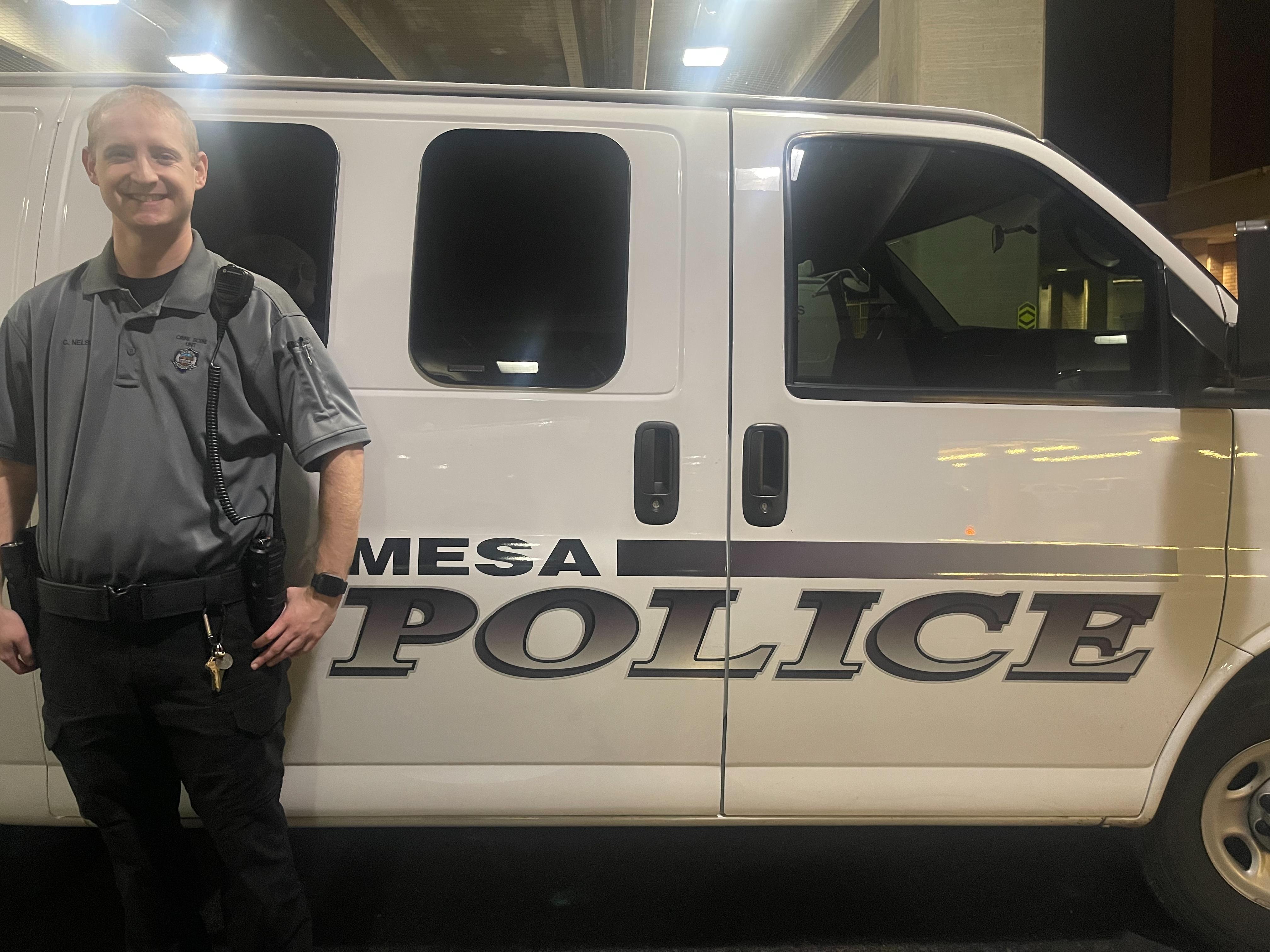 “I wanted to go into forensic science, and I applied to 16 agencies right after I graduated in December of 2019, including an application to city of Mesa as Crime Scene Specialist.” Christopher Nelson graduated just before the reality of the COVID-19 pandemic hit and began his job search in January of 2020. “I had an initial interview in February 2020 with the City of Mesa for a crime specialist job, but they halted all hiring process due to the pandemic.” Chris continued to apply for jobs, but now it was March of 2020 and he saw things were starting to shut down and no one is hiring. He was fortunate that he was able to live at home during this time, and while he was job searching he took on a new role – homeschool teacher for his younger brother, who was in 2nd grade. While it wasn't what he had planned after graduation, Chris' help at home was appreciated by his parents and Chris was happy to lend a hand at home helping with his siblings while he watched the country go into quarantine. “Everything aligned just such!” Chris exclaimed!

In May Chris expanded his job search beyond forensics so he could get to work and get work experience. He accepted a position with Sonoran Quest Laboratories to do diagnostic testing. He worked for them in molecular diagnostic testing, including doing COIVD testing. "I would come to work and there were thousands of vials to be tested and I left my shift and there were still thousands of vials to be tested! It was crazy busy but I was happy to be working, helping with the pandemic and getting experience."  Chris believes that having the MCB degree helped him get the job and he was happy seeing some of the things he learned while pursuing his degree being utilized in the diagnostic testing lab.

While he enjoyed the work and was grateful to be employed, Chris' heart was still set on a job in forensics, so he was happy to get a call in August from the city of Mesa who let them know they were hiring again. He interviewed with them again in September, now with a few months experience to add to his MCB degree.

When I asked him about the time it takes from job application to start date, Chris reflected that the timeline was much longer than he ever anticipated. While the Sonora Quest process took about six weeks, Chris thought this short timeline was due to the incredibly high demand for people and the urgency needed to get them hired and working quickly. The process for the Mesa Police department took about three months, but that was after his first conversation with them and then the hiring being on hold for seven months. Due to the background checks and polygraph testing required, the hiring process can take a while. Chris' advice for job hunters is to expect it to take months from submitting your application to starting the job. When I asked him how he handled looking for a job during the pandemic and learning that it takes a while for the hiring process to happen, he told me  "I had to learn to roll with the punches and adapt! The first 2-3 months after graduation were hard, applying and not hearing anything. I got on a lot of waitlists!" I asked him what advice he would give to new graduates who are job seeking and he shared this "Have patience and have people around you that support you! It's hard to keep up the positive mentality and keep applying. Don’t wait to apply to more jobs until you hear back from ones you applied to. Cast a wide net, the more you get out there, the more likely you are to get contacted." 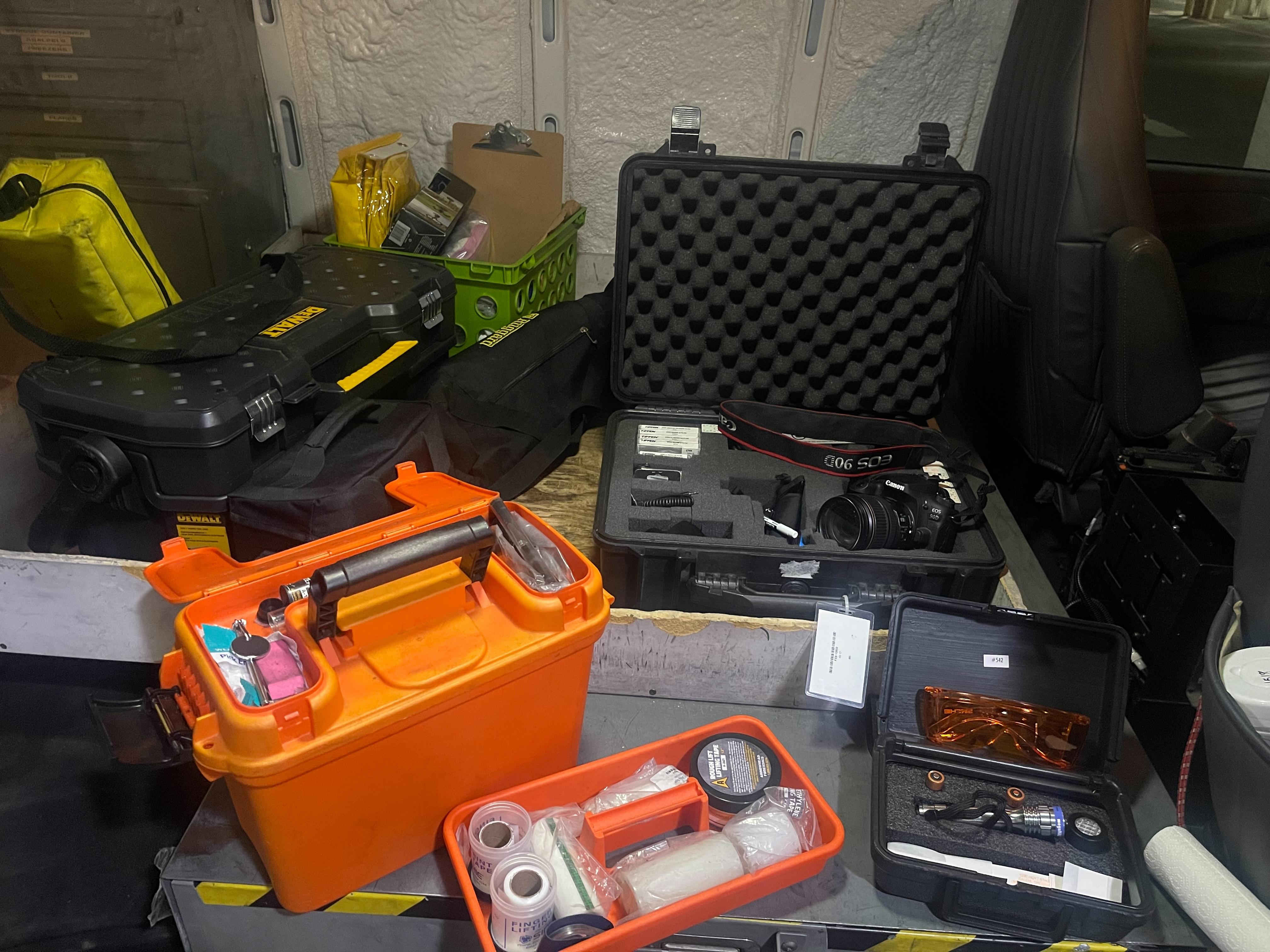 "I was pretty excited when I got a job offer from the Mesa Police Department! I started two weeks after the job offer and had to quickly shift gears from diagnostic testing to jumping into the training program at the Crime Scene Academy." All crime scene specialists for the Mesa Police Department attend their training program, which start with two months of administrative work for the forensics department and getting an introduction to the forensic labs and with the police department. After this rotation, five new crime scene specialists completed a four-month classroom program together, learning details of how to process a crime scene. And then in April of 2021, the group of five started field training. Chris was paired with an experienced crime scene specialist and did field training until the end of July. In August, Chris headed out in the crime scene van, on his own, to work his first crime scene, putting all the training he had taken to "help the community" as Chris told me. "I'm happy to be on my own and I like the unpredictability of the work; every day is different."

Having work in diagnostic testing and now as a crime scene specialist, I asked Chris what he learned during his undergraduate degree program that he most applies to his work. "Time management, critical thinking skills and teamwork skills" were the first things that came to Chris' mind. "MCB is a challenging degree, so I had to learn time management, how to prioritize my time and what was most important to focus on that day." Critical thinking skills have also helped him. "In MCB you learn how to look at a problem and think about how it happened and how to fix it. You have critical thinking to be successful at any job. You will always have situations of how ‘did this happen’ and ‘how do you fix this?" Chris appreciates the courses he took that had group activities, group projects and the extracurricular things he was involved in that required working with people. "I worked with different people with different backgrounds in college and liked that. It's similar to my work now, I work with a lot of different people and what I learned I college has been really helpful!"

Chris enjoyed his time at the University of Arizona, in the MCB department. When I asked he liked best about being in MCB, he noted the support he received. "The support I got in the department was appreciated! I like that MCB is a fairly small department - I got to know everyone in the - the advisors, the professors and the other students. I felt like I was part of a small community and I felt comfortable asking for help. The staff and faculty are accessible and approachable and I felt like I mattered to them!

I usually end my chats with alumni with an opportunity to give advice to incoming students, and all of them have useful tips to share. Chris wants to let incoming students know "you will run into challenges and it's easy to give up when you feel overwhelmed, but stick with it and you'll be better for it." While he knows it's said a lot, he believes in this: "We are not defined by the challenges we face, but by how we overcome the challenges." Chris had peers that he could talk to and talking things out helped him take a weight load off his shoulders. "It's easy to feel isolated in college, so having a support group of family and friends is important." Chris also utilized office hours of faculty. "If I was having trouble, I was not hesitant to go to office hours of faculty and preceptors. You have nothing to lose by going to office hours! Sometimes other students were there asking questions that will helped me. The advisors were very helpful and knew how to get thigs done! When I had a problem they would tell me 'It's ok, here's how we fix it'. They offer solutions to problems and help you work through them."