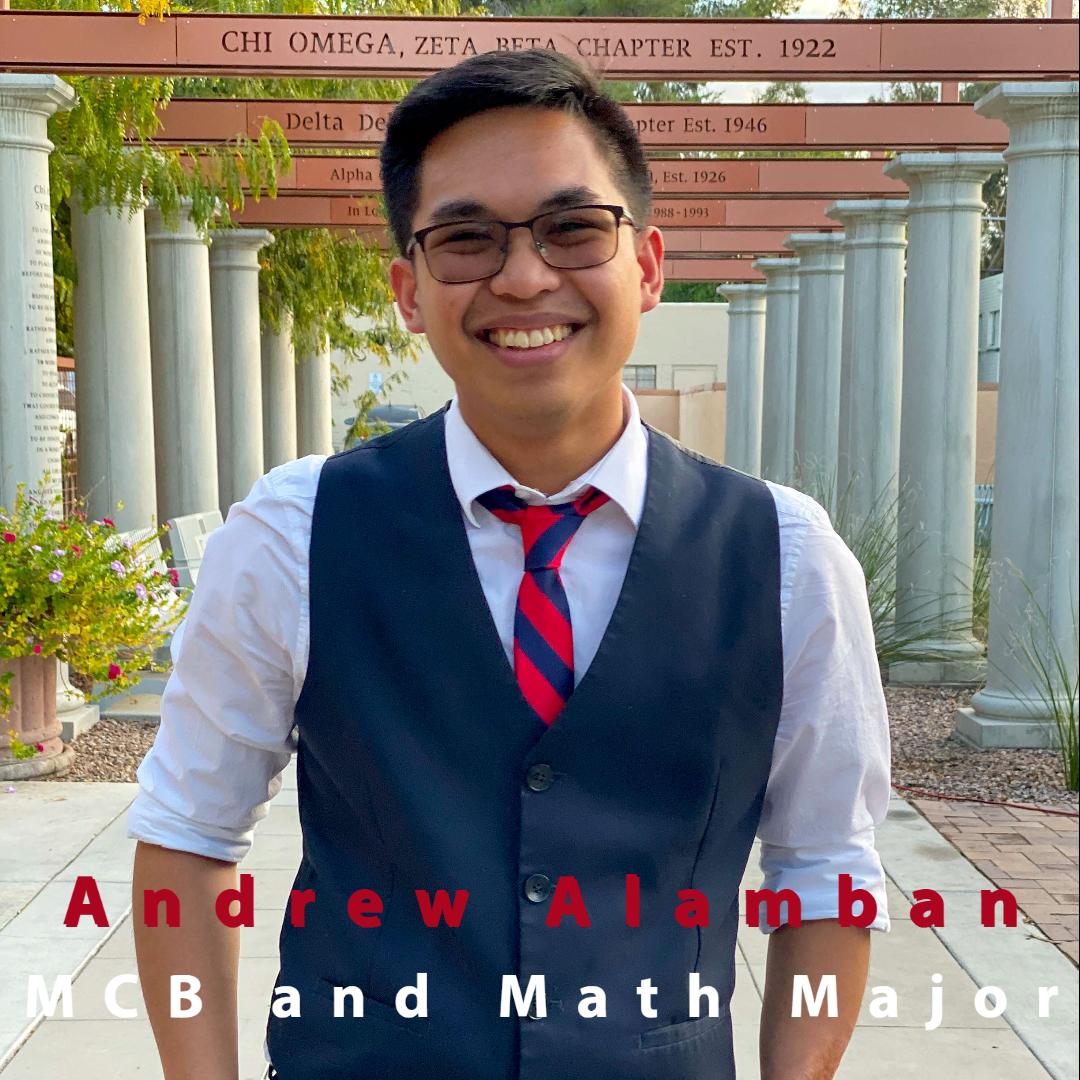 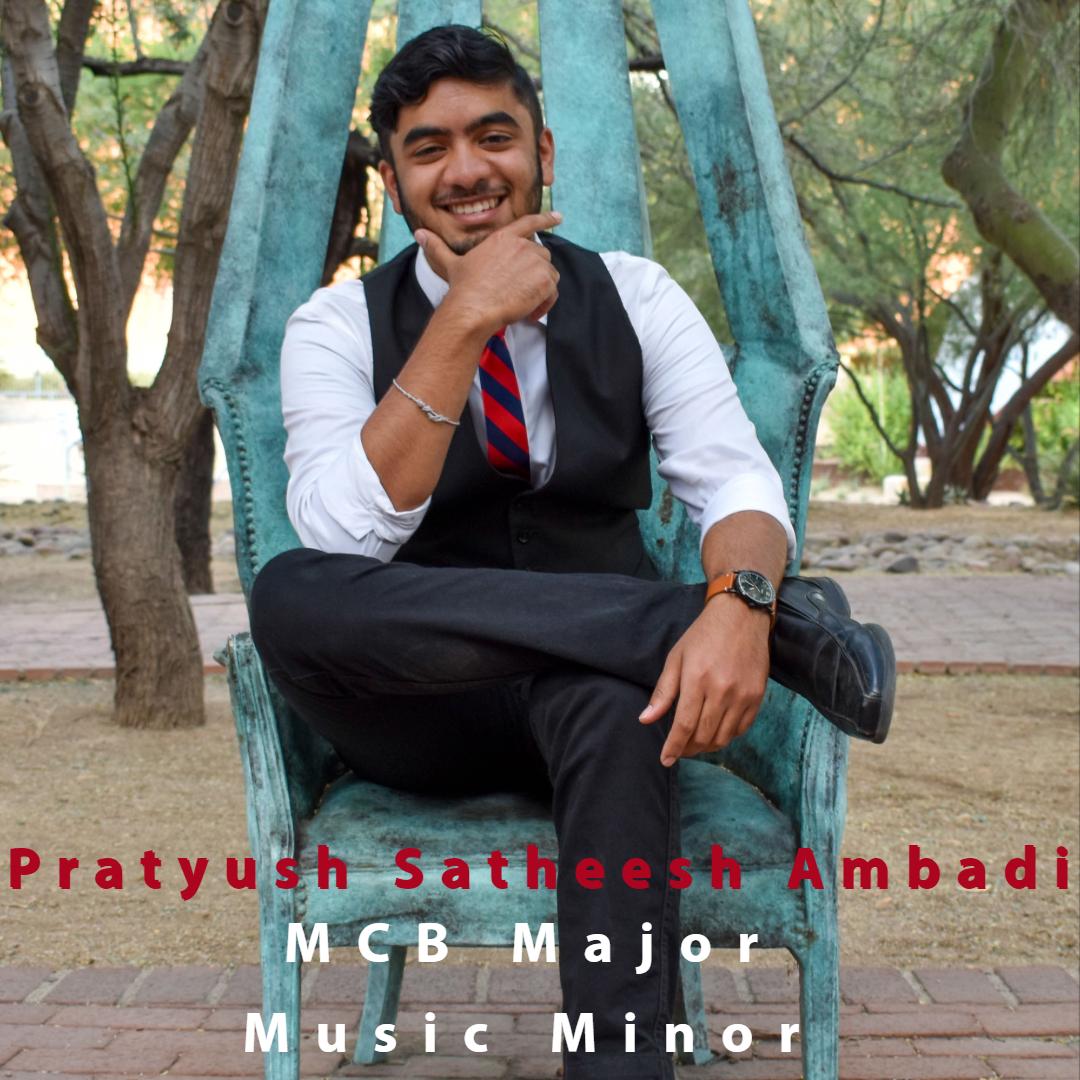 I recently sat down with Andrew and Pratyush to visit with them about their college experiences, how they blend their science and music interests and why they think it’s important to have activities and hobbies outside their major.

Why did you choose UA?

Pratyush Satheesh Ambadi (PSA): I knew I was going to go in state and stay in Arizona and I also wanted to be far enough from home to be “away from home”. I heard from students that the connections to Banner [Banner Health] and to the University of Arizona medical school were good and the opportunities for research were better at the UArizona.

Why did you choose MCB as your major?

AA: My first thought was to choose physiology to increase my chances of getting into medical school but when I went to freshmen orientation, I was still undeclared and decided to declare MCB! I had decided that I would learn physiology in medical school and wanted to start with the basics in undergrad. It turned out to be a good decision for me and I stuck with MCB as my major. One really interesting thing about MCB is you don't see what you are studying; you trust the machines to give you info and you interpret it. I also found applications of math in later courses and will get a major in mathematics.

PSA: I have been interested in biology since high school and I wanted to do something a bit more specific and still take subjects I liked. Even though Physiology offered a lot of the classes relating to medicine I’d want to take, MCB allowed me to really focus in on my interest in Biology and expand my knowledge further. I picked up a music minor as a sophomore. I have been singing since I was five playing piano since I was seven and wanted to keep it going. It was getting harder to find time for lessons in college so added the music minor.

What is the most surprising this you've learned as an undergraduate student studying science? 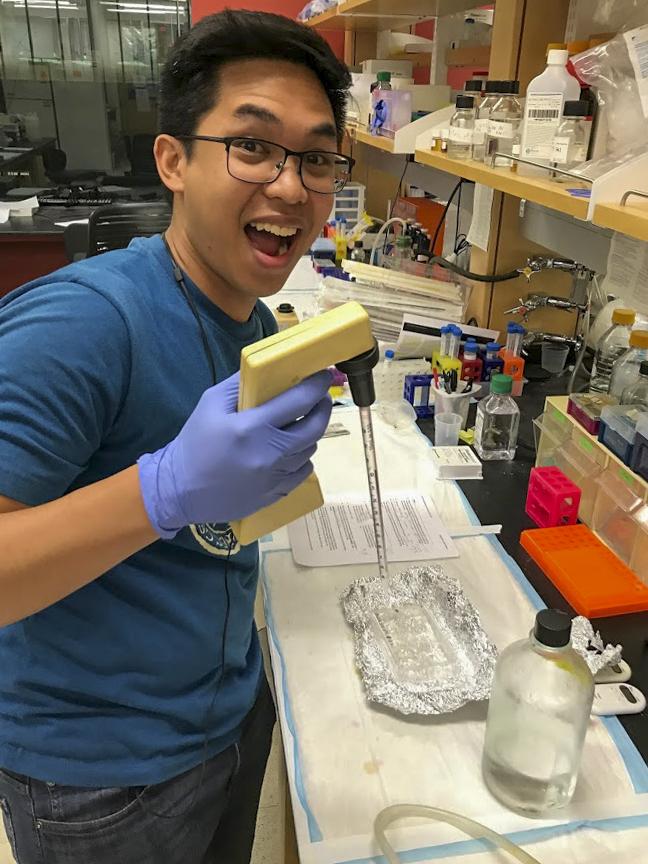 AA: I always thought science was absolute and factual. In high school my science exams were multiple choice so there was always a correct answer. What has been most surprising for me is I now know how little we know! The scariest and most exciting thing is when you ask your PI (Principle Investigator) a question and they say "I don’t know!" When I come up with a question my PI doesn't know the answer to, it's really cool. I learned from them that it's ok to say I don't know and to press on to find the next step. This reinforced for me the idea that science requires creative thinking.

Did what you learned change your post-graduation plans?

AA: Yes! One reason I had for becoming an MD and not a PhD scientist was because I thought everything as a PhD was figured out and as an MD there was still work to be done and problems to address. Through my experiences, I found that working on a research question was more enticing than being next to a hospital bed. I like being able to pursue a question at my own pace; I want to have the time to indulge myself in a question and I feel like I would get more time as a researcher to do that. I now want to go on to graduate school to pursue my PhD in science rather than go to medical school. The change in direction wasn't a surprise for me because my affinity for medicine wasn't that strong. When I found research, I found something more fun and engaging to me so it wasn't hard to make that change in plans.

When did your interest in music start and how have you stay connected to music in college?

AA:  I was in band in high school - I played the euphonium - and I dabble in guitar and play piano for my church.

PSA: When I got to the university, I saw CatCall (Cat Call a capalla) at the club fair. I talked to them, then auditioned. CatCall a Capella was my first experience in American music and I've been a member of CatCall since my freshmen year. I still play the piano and practice singing on my own.

AA: My freshmen year was an adjustment and I had a bit of difficultly connecting with people and knew I would benefit from getting involved in something outside my core studies, so I auditioned for wind symphony and got in and played euphonium. I planned on continuing in the wind symphony however, between my freshmen and sophomore year I didn't practice over the summer. I blew it; they didn't let me in! I had auditioned for CatCall as a freshmen and didn't make it so when I didn't get in the wind symphony, I auditioned again for CatCall. I got in this time and I think I got in because I didn't know how to be more open as a freshman. This group emphasized performance in addition to the singing, which meant allowing yourself to be vulnerable during a performance.

Both of you are members of The University CatCall A Capella group. Why is it important to you to be involved in non-science activities and clubs?

AA: To avoid burnout! I analyze data, or work on a specific thing for a while in the lab and hit a wall. Sometimes, experiments and ideas don’t work out (science isn't always clean!) and I need an outlet and my outlet is generally some creative endeavor. I still am introverted but CatCall has helped me out of my shell and has gotten me comfortable with talking to people. When you get to perform in a big room full of people, it instills new confidence in you that is useful even outside of performing.

PSA: Having one thing to focus on is good, but you need to find things outside your major to do. It's good to get involved in extracurricular activities. You start from scratch in college and have to build new relationships. Getting involved in clubs and activities outside your major and studying keeps you sane in college! Classes get really stressful and other activities breaks up the schedule and helps keep me motivated. You also pick up on skills in the clubs and activities. As co-music director, I picked up on leadership. As the leader you are the common denominator in the group. I also apply what I learn in science to my music and vice versa. For example, memorization applies in both science and music. A capalla also taught me how to perfectly practice. I want to understand the music, not just memorize the note. A Capella taught me to focus on what I really need to understand. I apply that in science classes. Understanding patterns in music applies to understanding patterns in science and then I don't have to memorize every detail since I understand what I’m learning. 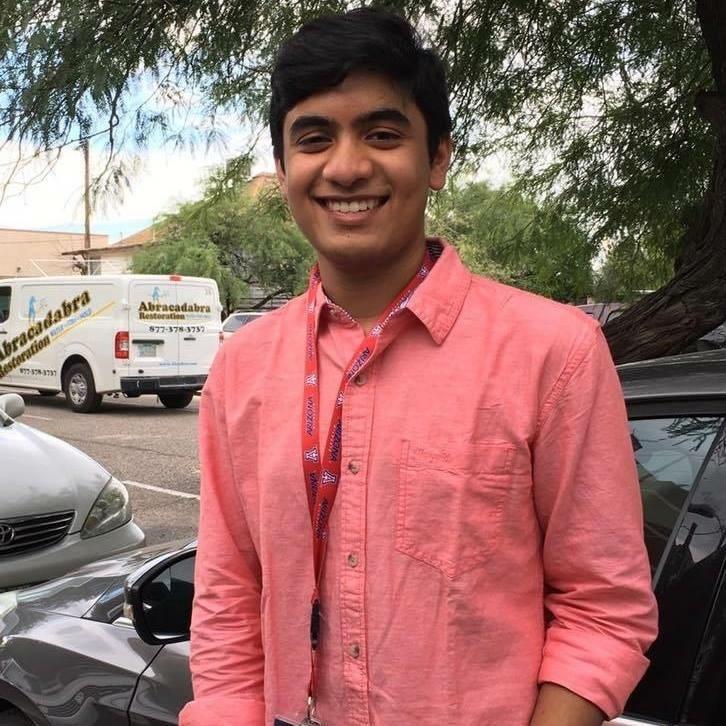 AA: Outside activities helps me pull away from my core studies and be a more well-rounded person. They help me interact with people in a way other than being a scientist.

What skill have you learned that you think will be most useful when you graduate?

AA: Having the confidence in reaching out and collaborating with people. When I have an idea, I'm no longer scared to put it out there; I am confident putting it out there now. My fear of presenting an idea and hearing "no" is not as high as it was.  Being able to present my ideas confidently is huge! Another cool skill I've learned through research and math is building logical thinking, step by step, to prove an idea.

PSA: Time management is one I'm still working on! It's still a learning process but I’ve gotten better at it in college because I have to adjust every semester with a new schedule. There is pressure in college and I've learned to work under pressure. I've learned to embrace that pressure and use it to motivate myself even harder and look ahead. I like to envision the end product. I've also learned how to put things in the past - for example if I did poorly on an exam, I have to move on.

What are your plans post-graduation?

AA: I want to go on to graduate school to pursue my PhD in science. Hopefully still continue my music as a hobby!

PSA: I’m thinking of taking a gap year, maybe doing research, and then medical school. Maybe get a job in the science field. I want more clinical, hands on experience. Studying abroad would be great too!

What would you say to a high school student considering UA and a science major?

PSA: Study science because I love science so much! That is where the next big thing is going to happen. Random discoveries are always being made. There is a good chance whatever you like to do is part of a science field. Everything is changing, so never stop learning.

What advice would you give someone just starting college?

PSA: In your first couple of years, stick your foot in everything, then prioritize and realize what you really want to be part of and what will help in the long run. If you don't experience things, how will you know what will help you?

AA: I never thought of myself as a proper singer until college, and this was due to some exploration and even taking opportunities in something that I was slightly interested in. It ended up being something that meant a lot to me. Ultimately, I would take a wide sample and then decide which of those experiences are truly essential. On the other hand, it is important not to overcommit yourself so find what is meaningful to you. 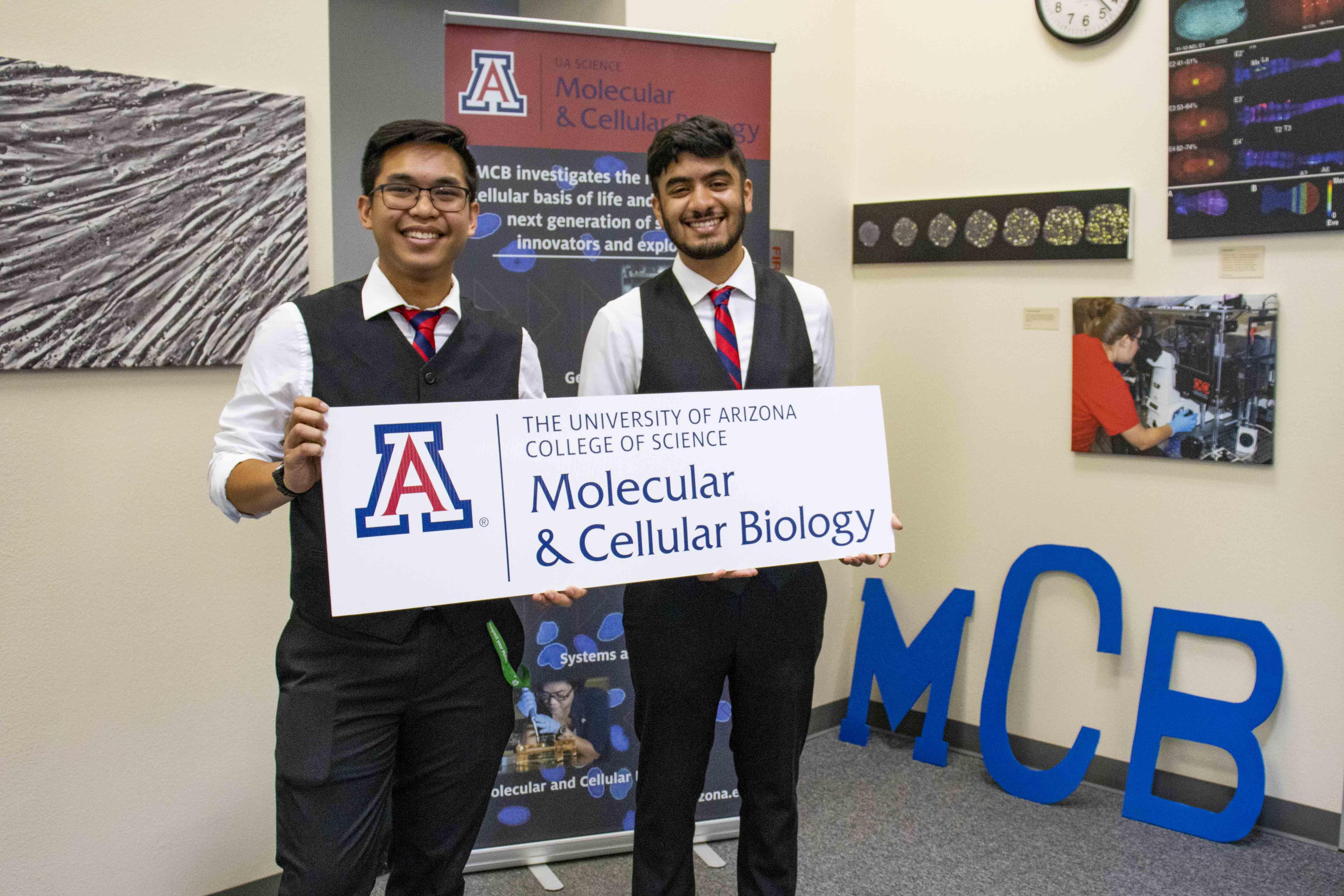