Engineering a Living Organism is Fascinating

Are you thinking about starting your own business? Starting a company? Being an entrepreneur? If your future vocation or avocation are headed in this direction there are two traits you should have - “grit and resilience”, according to Sean McClain, BS MCB, Class of 2011. “It's about seeing your vision and continually working towards your vision every day no matter what is thrown at you. Every day you are fighting for your career and your company. You take one day at a time, you get up every day and do what you need to do, over and over, regardless of successes and failures.” Sean speaks from experience when he talks about starting a business and needing to have grit and resilience – he founded AbSci when he graduated from college and remains the company’s CEO. 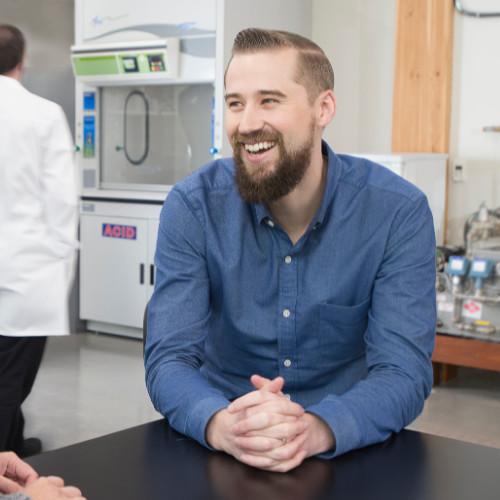 AbSci isn’t his first business venture though; he started his first business when he was 12 years old. Sean wanted a video game and his dad insisted that Sean earn the money to purchase the game. He started earning money by mowing his neighbor’s lawn. He did well and realized he could build a business out of mowing lawns. He grew this business, adding more homeowners while he honed his sales skills. By the time he was 18, he had expanded his business to commercial lawns. It didn’t come without its challenges, though, as Sean forced himself to do things outside his comfort zone, knowing if he wanted to build his business, he would have to practice skills he wasn’t comfortable with. “I'm an introvert by nature. I don't like big crowds. I had to get out of my comfort zone and sell myself and my services. I knew how important it was that I learn to sell.” To add customers Sean went door to door selling his lawn mowing services. “As an introvert, it can be difficult to put yourself out there. I got my pitch down and I went door to door selling. This experience was instrumental for my own growth.”

With skills he honed building his first business, savings to pay for college and a passion for entrepreneurship, Sean came to the University of Arizona, as a Mechanical Engineering major. He took Intro to Chemistry his first semester; “Intro to Chemistry with Dr. John Pollard completely changed my world! I fell in love with chemistry.” The summer following his freshmen year, he had an internship at Oregon Health and Sciences University where he was a research associate helping produce crystalline proteins (lens proteins in your eye). “I made recombinant proteins in E. coli and thought ‘Wow! you can engineer E. coli!’ Engineering a living organism was super fascinating to me.”

Sean returned to the UA after his internship and switched his major to MCB. “I was on a trajectory to have a career in research but I wasn't entirely sure about that path, so I started going down the M.D.-Ph.D. route.” Around this time, Sean attended a scientific conference in Seattle and had a conversation that changed his path yet again. “I started up a conversation with another attendee and by the end, we had started talking about producing antibodies in E. coli and the potential that concept had to disrupt.” That conference, and conversation, sparked the vision of starting his own company. As he began his junior year, he decided to graduate a year early and start AbSci.

Fueled by his desire to be an entrepreneur in a field he is passionate about Sean merged his interest in molecular biology, chemistry and engineering and started AbSci in 2011 where he is the CEO. As CEO, Sean (a Forbes 30 under 30: Science honoree) oversees the company’s mission to improve the speed (weeks, not months), cost (a mere fraction) and simplicity of producing novel proteins that enable groundbreaking progress in productivity to biopharmaceutical R&D and manufacturing.  As the inventor of AbSci’s core protein expression and purification technology, Sean performed the initial proof of concept; however, his role has evolved to spending more time on strategy, which can mean less time in the lab. “I had to decide between being CEO or to stay in the details. At the end of the day it's still the creative aspect that I like. I like what I do because I can be creative. Where I'm most creative as CEO is creating the vision and setting direction of where we are going.”

Sean knows firsthand how important grit and resilience are. “There is so much we don't know and so much we can further discover that we can innovate on. Figuring out how things work and then engineering them to get the outcome you're looking for is critical, so you also need to problem solve. There are always issues and problems and it's all about how to solve them. You can't let the failures consume you.”

When I asked Sean what he looks for when hiring college interns and college graduates, his answer echoed his thoughts about what it takes to be a successful entrepreneur - “People with grit and resilience and who don't get fazed by failure - that happens in startups! I also want ambitious people and I have to know they believe in our vision. I want people to work at AbSci who want to do something big; they want to change the world!”

We look forward to hearing more about how Sean, and his team at AbSci, continue to help companies use your technology to find new therapies!