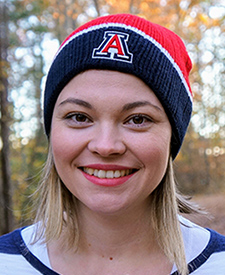 "MCB and the University of Arizona gave me the opportunity and encouragement to reach my potential. I went from wondering if I could keep up to having the honor of speaking to my graduating class. I don’t think I could have done that anywhere else."

Mary-Beth Roberts grew up loving science, but afraid of pursuing her interest. During her childhood in New Zealand, she developed a fear of math that haunted her even after completing high school. At the age of 20, she moved to the United States to marry her American fiancé and started working in retail. But she couldn't shake the biology bug.

"I checked out books from the library about biology, I watched documentaries. I did some shadowing at a hospital," Mary-Beth recalls.

Her innate curiosity and passion for science motivated her to navigate the application and financial aid process and enroll at Pima Community College (PCC), where she faced her fear of mathematics, made use of every tutoring opportunity, and achieved her first "A" in a math class.

"That experience taught me that I was my own worst enemy," explains Mary-Beth. "The realization helped me figure out that I can and will do this, and that it is ok to ask for help, reach out, and be vulnerable. It helped me to keep pushing myself and start thinking about the University of Arizona."

That’s when Mary-Beth discovered Molecular and Cellular Biology. As she was finishing up at PCC, Mary-Beth met with MCB’s Academic Advisor, Marisa Lester.

“I wasn’t sure if getting into MCB was even a possibility,” Mary-Beth recounts, still feeling her dreams were somewhat audacious. “Marisa was really welcoming; she encouraged me to apply and gave me the confidence and opportunity.”

Transferring to UA, Mary-Beth took a semester to adjust, and was soon reaching new heights. A teaching assistant (TA) in her Introductory Biology Lab (MCB 181L) asked her to serve as a preceptor the next semester.

“It was a great experience, and I realized I really liked teaching,” Mary-Beth said.  She enjoyed it so much, she served as a TA for two subsequent semesters.

As she dove deeper into her studies, Mary-Beth traded her retail job for a position in MCB Professor Daniela Zarnescu’s lab, where she worked for two years.

“LSS [Life Sciences South] became my home base,” Mary-Beth laughs. “It’s great to have a place with tables outside the advising office to hang out and study. You see professors walking around, catching the elevator—they become a bit more human. Lots of MCB students get involved in research and even publish as undergrads, which is a great part of the major.”

Active learning-courses like MCB 305 really helped focus Mary-Beth, who especially liked how the discussion format pushed students to engage with the material and grow intellectually.

Explaining her rationale for choosing MCB as a pre-heath major, Mary-Beth said, “while Physio[logy] is the classic pre-med major, MCB is very applicable, especially as medicine is shifting to the molecular and cellular level—look at personalized cancer treatments.”

She credits “the support I got from people who saw something in me and recognized my potential. I look back and it’s still surreal.”

Bringing her love of working with people together with her love of biology, Mary-Beth is now studying to become a genetic counselor, working on her Master’s at Virginia Commonwealth University.

“I wanted to stay in Arizona, but UA didn’t have a program at the time,” Mary-Beth explains, adding that she is delighted UA is now offering a Master of Science in Genetic Counseling.

Mary-Beth is thankful for having a strong science foundation as she further develops her counseling skills. Her enthusiasm is evident as she talks about starting her career in the growing area of genetic counseling on graduating in 2019.

“It’s an exciting field—there are so many areas you can work in. Cancer, pre-natal, industry, research, and more,” Mary-Beth enthuses. “You don’t get locked out of different areas because you don’t have to specialize prior to completing your training.”

MCB degree in hand, a Master’s on the horizon, Mary-Beth is ready to seize the next opportunity.