Justin Frere Loves the Lab (and the Feeling is Mutual) 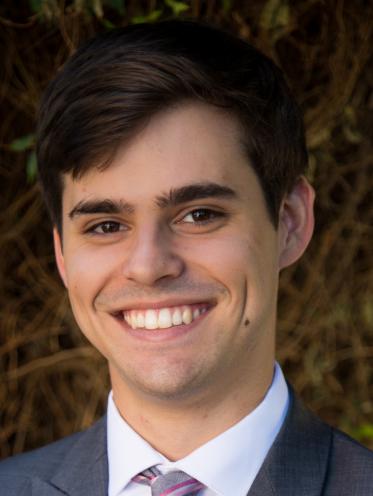 “It was cool to see the work I was doing on the benchtop having a global impact on public health and clinical care,” beams MCB Senior Justin Frere in recounting his research experiences.

Frere, the recipient of the 2018 UA College of Science Excellence in Research Award, describes how his exposure to immunobiology in high school led to a passion for research and a paper in Science while still in his junior year.

“Initially, I thought about being a doctor,” recalls Frere, a Flinn Scholar from Phoenix. “My science teacher, Ms. Cheryl Lenox, connected me to a lab at the Mayo Clinic in Scottsdale where I started doing research part time in high school.”

Spending time in the lab working on eosinophils, a white blood cell often associated with parasitic infection, Frere was hooked.

“Expanding the boundaries of what we know is really awesome—having your ideas materialize into new knowledge,” Frere recalls how his interests shifted from medicine to research.

With advice and support from the Honors College and the Molecular and Cellular Biology Department, Frere sought out a lab at UA before starting his freshman year.

“I got really interested in immunobiology and [Dr.] Janko [Nikolich-Zugich] was doing amazing work on T cells in aging,” Frere enthuses. “I walked in the first week of freshman year.”

His first year in the lab, Frere worked on initial cohort characterization of elderly people participating in a clinical trial exploring the connection between cytomegalovirus (CMV) infection and response to the flu vaccine, expanding his understanding of immunology and microbiology.

That summer, he returned to the Mayo Clinic and eosinophils through a summer undergraduate research fellowship. Dr. Alfred Doyle, his mentor, gave Frere a project exploring the role of eosinophils in chronic asthma lung pathology, and the opportunity to get involved in experimental design.

“They gave me the freedom to pursue some of my own ideas,” Frere explains, “and this allowed me to help shape the direction of the project.”

With an expanded toolkit, Frere returned to the Nikolich-Zugich lab his sophomore year, where he worked on his own project on CMV’s effect on the immune response in mice. Meanwhile, he turned to MCB Senior Academic Advisor Marisa Lester for help in achieving his goal of conducting research abroad his junior year.

“The Flinn Scholarship allows you to study abroad,” Frere smiles. With an introduction from Nikolich-Zugich, he planned to work with immunologist Dr. “Victor Appay in Paris at the Sorbonne my second semester of junior year. I took six units of internship, three units of research, and three honors independent study. I have to hand it to Marisa, when I went to her to see if it was possible, she said ‘let’s see what we can figure out.’”

With an academic plan that made Paris possible even with an MCB and Physiology double major and Public Health and Biochemistry minors, Frere was off to the Icahn School of Medicine at Mount Sinai for the summer before his junior year, where he would see the global impact of research.

“We were working on Zika,” Frere explains, describing how Dr. Jean Lim’s lab showed that previous infection with viruses related to Zika, such as dengue and West Nile, could increase the severity of Zika. The resulting paper, “Enhancement of Zika virus pathogenesis by preexisting antiflavivirus immunity,” was published in Science in April 2017.

“This has important implications for treatment and vaccines,” Frere notes. The next summer, he would return to Mount Sinai work on Zika in pregnancy.

The public health aspect of his research did not escape Frere, who is drawn to policy and is the Under Secretary General for Domestic Coordination for UA’s Model UN program.

Seeing the translational impact of the project he was working on put Frere on a course for an MD-PhD.

“I would love to eventually become involved in science communications and policy,” he acknowledges.

His mentor, Nikolich-Zugich, sees a bright future ahead for Frere, “Justin is just a phenomenally gifted young scientist and will undoubtedly be a future leader in medicine and science.”

In his senior year, Frere has taken the work he did in Paris on immunometabolism in T cells and turned it into a new collaboration in Nikolich-Zugich’s lab, where he continues to explore the potential benefits of metabolic adjuvants in vaccines that switch T cells in the elderly to a more “youthful” metabolic state.

From Arizona to France and back, his own path forward has been shaped by a variety of mentors.

“I’ve worked in a few labs, and the thing that’s been really valuable is to see how people think—how they approach the science, the problem,” Frere concludes.

Starting to develop a laboratory background in high school allowed Frere to excel in MCB early on.

“It really helped in class, especially with genetics,” he notes. Once he transitioned to upper division courses, Frere found coursework lifted his abilities in the lab.

“In upper division [courses], you start learning those cool, important concepts,” he enthuses. “They helped expand my horizons. Cell and Developmental Biology [MCB 305] was awesome because everything was experimentally oriented. It exposed me to things I hadn’t seen in the lab, including analyzing data and new techniques. It helped me think a lot better as a scientist.”

In addition to the labs he’s worked in, Frere credits MCB's Dr. Carol Dieckmann with helping him frame his scientific education early on.

“She was a great mentor,” he affirms. “She helped me figure out what I wanted to do, how to get a solid foundation.”

With that solid foundation under him, Frere aims to climb high--quite literally this summer as he plans a five week Spanish immersion program in the lofty heights of Cuzco, Peru, elevation 11,152 ft.  Then, Frere heads back to Mount Sinai to start an MD-PhD program, where the lab bench beckons.