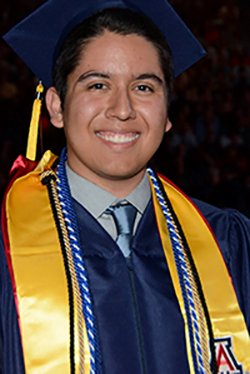 Alec Calac (Pauma Band of Luiseño Indians) has the kind of drive you find in people who change the world. At the University of Arizona, he found a rich environment to develop his intersecting passions—medicine and science, leading by example, and advocating for the involvement of Native Americans and other underrepresented minorities in STEM. Alec graduated in 2016 with a B.S. in Molecular and Cellular Biology (MCB) and Neuroscience and Cognitive Science (NSCS), with a minor in Biochemistry.

“UA MCB has world-class professors teaching classes to students,” Alec enthuses. “Introduction to Systems Biology [MCB 480] taught by Prof. Andrew Capaldi was an amazing course.  It was a great way to study the biological sciences through a more quantitative lens.”

Applying to the UA from his hometown of San Diego, Alec initially was intrigued by the multidisciplinary Program in Neuroscience and Cognitive Science (NSCS). He then elected to double-major in MCB and NSCS, seeing “the benefit of having a broader background in MCB.”

“I had always wanted to become a physician,” Alec recounts. “My experiences at the University of Arizona and at the NIH [as a summer researcher] gradually incorporated science into my long-held aspiration for medicine, leading me to pursue an MD-PhD.”

Dr. Capaldi notes that he saw potential in Alec and encouraged him to pursue graduate school. “Prof. Capaldi was very supportive during the medical school application process,” Alec recalls. “I still see him when I am in Arizona.”

“I have a number of UA mentors to thank for turning me into who I am today,” Alec adds, citing name after name. In 2012, Alec met Dr. Teshia Solomon, Director of the UA Native American Research and Training Center. She provided “friendly, fierce, and strong mentorship” to him, and introduced him to Dr. Sharon Milgram, Director of the National Institutes of Health (NIH) Office of Intramural Training and Education.

“Dr. Milgram told me about the NIH Summer Internship Program in Biomedical Research,” Alec explains. “I completed an eight-week summer internship in a functional and molecular imaging laboratory and met a cohort of Native American high school and college students from different areas of the United States.”

Alec returned to the same research group in 2014 and 2015, where he further developed his research and critical thinking skills. Back at UA, he actively sought out opportunities to enhance his leadership skills: leading the UA Society for Advancement of Chicanos/Hispanics and Native Americans in Science (SACNAS) Chapter, tutoring for the UA Strategic Alternative Learning Techniques (SALT) Center, and interning for the UA Blue Chip Leadership Program.

Today, Alec is the leader of his own research project exploring the plasticity of the rodent olfactory pathway with manganese-enhanced MRI, part of a two-year fellowship at the NIH.

With the network that he established during his summer internships, he also has served as an advocate for fellow Native American students with NIH leadership through the NIH Tribal Advisory Committee (TAC).

“Through the TAC, I have highlighted the barriers that deter educational attainment for Native American students,” Alec says. “I have also stressed the importance of mentorship for aspiring Native health professionals and biomedical researchers to Sen. Tom Udall (D-NM), Vice Chairman of the Senate Committee on Indian Affairs, and Congressmen from the House Appropriations Subcommittee [on Labor and Health and Human Services].”

Alec cites the UA Pre-Medical Admissions Pathway (P-MAP) as an example of a program that works to increase the number of AI/AN physicians. It is a 12-month, full-time, intensive medical school preparation program designed for students who have experienced greater than average challenges in preparing to become competitive medical school applicants.

As his fellowship wraps up, Alec is looking ahead to starting an MD-PhD programs in the fall of 2018. He laments that there have been “less than 10 AI/AN matriculants to MD-PhD programs” since 2010. He aims to increase that number, having chosen to matriculate to UC San Diego School of Medicine for his MD-PhD as part of their Medical Scientist Training Program.

Alec entered the UA with a desire to be challenged. Now, he is challenging the federal government and the scientific community to maximize opportunities for underrepresented minority students as he prepares to start medical school.

“Change is slow, but action by action I strive to enact changes that will have inter-generational benefits for decades to come,” Alec concludes.

The University of Arizona (UA) offers current and incoming Native American students personalized scholarship and financial aid service.  In addition, Arizona's Science, Engineering, and Math Scholars (ASEMS) program provides services to support students in graduating with a STEM major. This program focuses on promising students who are underrepresented in STEM, especially students who are first in their family to attend college, from low-income households, who transferred from a community college, and from underrepresented groups, such as women and minorities.