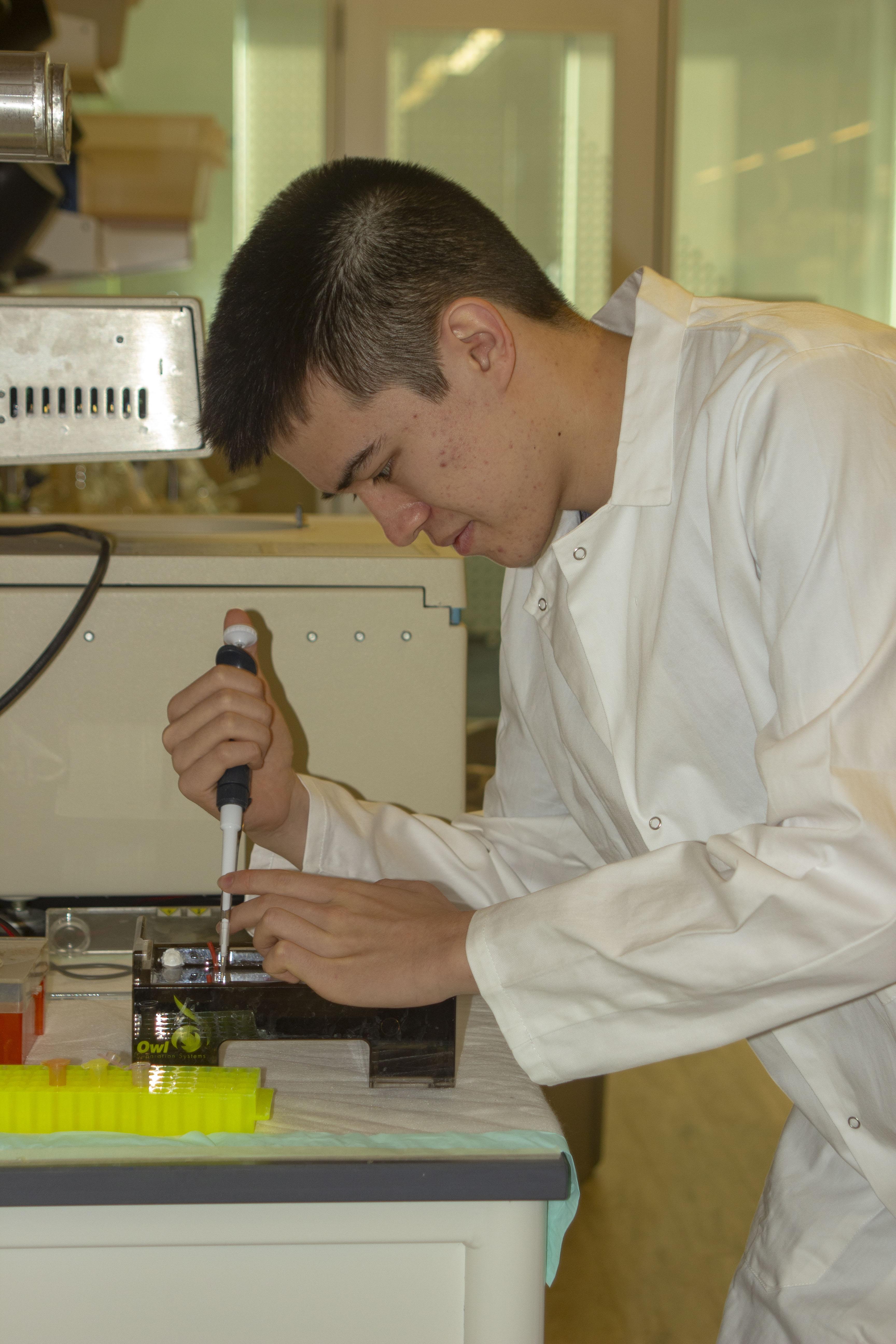 The spring 2020 Excellence in Undergraduate Research was awarded to Bennett Van Camp. This award is presented to an MCB senior who has demonstrated excellence in their undergraduate research. "In high school I knew I wanted to explore research but didn't know what that looked like as a career. Through my work in the Nagy lab I learned that I can be a Principal Investigator (PI) or work in industry."

Van Camp has been working with Dr. Lisa Nagy in the Nagy lab since his 2nd semester of his sophomore year as an undergraduate research assistant. He has been in the Undergraduate Research Opportunities Consortium (UROC) program since the 2nd semester of his junior year. "Working in the Nagy Lab was my first research experience and it was really daunting at first to learn how all of the machines and methods worked but I eventually got the hang of it!"

Van Camp's project in The Nagy Lab is to study regulatory regions (DNA that surrounds the gene) of segmentation (process in early development that is the initial stage of body plan development) genes in red flour beetles. The goal of the project is to take those regulatory regions and attach them to a protein called mCHERRY (named for its red fluorescent color). "We want to put that back into the beetle and make a movie of it as it develops. If the regulatory region turns on the mCHERRY - where it would normally turn on the segmentation gene - now you can see when and where the gene is being turned on. The embryo is then filmed during segmentation using a camera attached to a microscope"  Van Camp was one of the first people in the lab to work on this project and he has learned much through the process.

"Currently, we're still in the process of putting it back in the beetle. Most of my progress has been on the process of attaching the mCHERRY to the regulatory region. It sounds uncomplicated but the process can be very finicky!" Van Camp is grateful for the time he has worked on the project and for how much the lab has taught him about the research process. "I've put a lot of time interpreting negative results and understanding the science and tweaking the protocol every time I get a negative result. The first attachment took me forever, and each time after that the time taken has decreased."

"This research has made me a tenacious person. When you get a negative result (in the lab or in life!) there is always something you can pull away from it. I always think “I can do this better next time, or I can change the process and learn from it.” It's taught me how to think critically and to never give up." Van Camp shared that that at the beginning of this project, even though he did not have a lot of positive results, he kept at it and was determined to learn the science behind the protocol. "Anyone can follow an instruction sheet but I really wanted to understand what I was doing so I could teach to others.  A lot of the early experiences was me getting negative results and having the interpret what could have gone wrong. We didn't always know, but we would make a guess and alter the protocol, try the new protocol and maybe get a new negative result. I kept iterating and changing the process until it worked."

In addition to learning foundational science research techniques and gaining a lot of tenacity, Van Camp told me working in the lab doing research made him a much more confident speaker in both one on one and in large groups. "Dr. Nagy really pushed me to attend research conferences and present my work. It's challenged me to deeply understand my research so I can explain it to someone unfamiliar with the topic. I am a much more confident speaker now because of it." Van Camp presented his research at multiple conferences including the UROC and UBRP conference here at the University of Arizona.  "I think it's critical for scientists to bridge the gap be able to discuss to what is relevant and to communicate your work to the public at large. Reading scientific literature when you are first starting is incredibly difficult as it is usually dense and full of jargon. A member of the public isn't going to want to read an 80-page research paper. Being able to communicate what you found and what you did in a short, concise period of time either through writing or talking is something I feel the science community can always improve on."

Van Camp is an Arizona native, and graduated from Hamilton High School in Chandler. He chose the University of Arizona because of the strong biology program and its commitment to conducting cutting edge research.

Choosing a major is a big decision when you enter college. When Van Camp first came to UArizona he was a biochemistry major. "I knew I wanted to do research but didn't know how to get there so I started with biochemistry. After I completed my first semester, I wanted to add more biology courses, so I added the MCB major. Both majors have a strong research component and both departments have many undergrads working in their labs which was perfect for me."

With a robust lab experience, high GPA and lots of tenacity Van Camp has applied to, been accepted by several PhD programs. He plans to get his PhD in a similar field of study and is considering all his options.

When Van Camp wants to wind down and focus on something other than science, you'll likely find him at home playing board games with his friends. "My friends and I are board game junkies." Additionally, you might also find him cooking and trying a new recipe. "I like to cook and my roommate and I try new things to cook and experiment with recipes. My favorite now Mongolian beef and rice. Easy to make and delicious!"